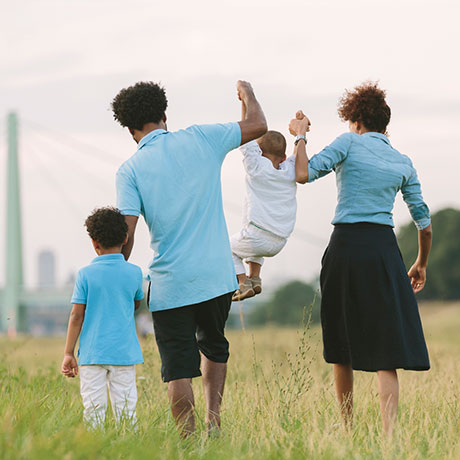 There are more people living with a diagnosis of cancer in Ontario than there were 20 years ago. Cancer prevalence — the number of people previously diagnosed with cancer who are alive at a given point in time — is a function of the incidence[*] *Close referenceThe number of new cancer cases diagnosed during a specific period in a population. of and survival[*] *Close referenceRelative survival measures the likelihood of a person diagnosed with cancer surviving for a certain amount of time compared with similar people in the general population. from cancer. With increasing incidence and improving survival, the prevalence of cancer over time has also been increasing in Ontario, a province with an estimated population of 14.5 million in 2019.

Because trends in cancer prevalence reflect the increase, decrease or stability of cancer incidence and mortality rates in the population, they can help determine how best to distribute diagnostic, treatment and care resources.[1]

This chapter presents limited-duration, person-based prevalence counts. “Limited-duration” cancer prevalence describes the number of people alive on a certain date (called the index date) who were diagnosed with cancer within a specified previous number of years (e.g., 2 years, 5 years, 10 years, 30 years). This report uses an index date (i.e., a reference date) of January 1, 2017. “Person-based” prevalence counts mean that an individual with cancer is counted only once in this measure, even if they have had more than 1 cancer diagnosis.

Prevalence counts based on duration are important for understanding the impacts to the healthcare system. In the first 2 years after their diagnosis, the main healthcare services a person would use are for primary treatment. During the next 3 years, healthcare services mainly consist of clinical assessment to see if the cancer has returned. In the next 5 years, they would mainly use follow-up services. People living with cancer (prevalent cases) whose cancer diagnosis occurred in the previous 10 or more years are long-term survivors. Their cancer experiences are often important for understanding the long-term (or late) effects of a cancer diagnosis and the associated use of healthcare services. A 30-year period provides reasonable time window for accounting for all past and current survivors.

Prevalence by Sex and Cancer Type

An estimated 393,785 people living in Ontario had been diagnosed with cancer in the previous 10 years.

Female breast cancer was the largest contributor to 30-year prevalence, accounting for 133,813 survivors at the end of 2016 (Figure 8.1). Prostate (119,108) and colorectal (72,673) cancers were the next most prevalent types. Lung cancer, despite being the third most commonly diagnosed cancer, ranked only eighth in terms of prevalence because of its low survival. It was surpassed by these higher-survival cancers despite their lower annual incidence: thyroid cancer, lymphoma, melanoma and uterine cancer. 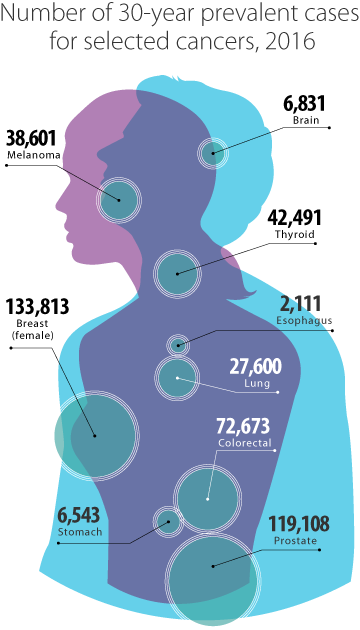 The increase over time in 10-year prevalence for the most common cancers and all cancers combined is shown in Figure 8.2. The rate of increase in prevalence varies greatly by cancer type. The highest increases are for prostate and female breast cancers, which have higher survival, while the lowest are for colorectal and lung cancers.

Overall, the prevalence of all cancer types except laryngeal increased each decade between 1996, 2006 and 2016 (Table 8.2). However, prevalence for a few cancers was relatively stable in either males or females.

Among males, the prevalence of laryngeal, lip and oral cavity, and squamous cell carcinoma of the lung was relatively stable.

The majority (50.7%) of 30-year prevalent cancers in 2016 were among Ontarians between the ages of 60 and 79 at diagnosis, followed by those ages 80 or older (22.4%) (Table 8.3). However, this pattern was different between sexes. Although males had the same pattern as both sexes together, the second-highest prevalence for females was among those ages 40 to 59. This is largely attributed to the higher prevalence of breast, cervical, thyroid, melanoma and ovarian cancers among females in that age group.

Among younger people (ages 0 to 39), females are more likely than males to be living with cancer. Notable patterns in this age group include the higher prevalence compared with older ages for brain cancer, which has higher survival rates at younger ages.