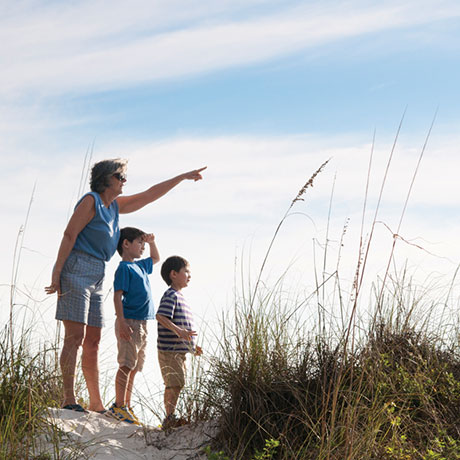 Cancer incidence refers to the number of new cases of cancer diagnosed within a specific period. This chapter presents actual (non-projected) incidence rates and trends based on counts considered complete as of 2016 – the latest available year.

Over the past 3 decades, population aging and growth contributed far more to the number of new cancer cases than actual changes in cancer risk and cancer control practices (Figure 5.1).

The probability of developing cancer refers to the average chance of being diagnosed with cancer over the course of a lifetime.

The probability of developing a specific type of cancer depends on many factors, including:

In addition, the probabilities in this report reflect the average risks for the overall population and do not take into account personal risk factors. In other words, an individual’s risk may be higher or lower than the numbers reported here. 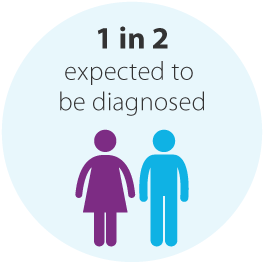 In Ontario, 1 in 2 people, or 45.3%, will develop cancer in their lifetime (not including non-melanoma skin cancer) (Table 5.1). The probability of developing cancer was nearly the same for both males and females, although it varies based on cancer type:

Incidence by Sex and Cancer Type 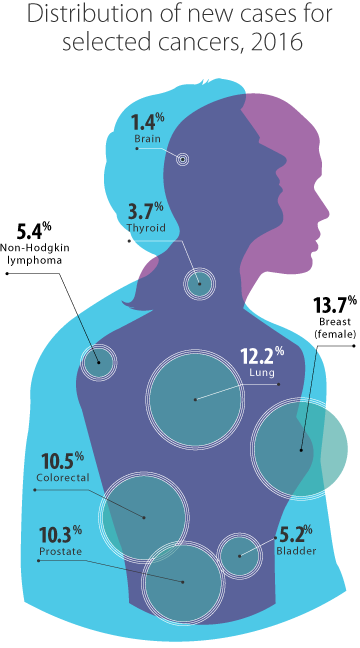 The greatest difference in incidence between males and females was for the following cancers: laryngeal, bladder, esophageal, liver and intrahepatic bile duct, oral cavity and pharynx, stomach and kidney. Notably, the risk of each of these cancer types is associated with the use of either tobacco or alcohol,[4,5] and in Ontario, tobacco and alcohol use are more prevalent among men.[6]

The incidence rate was higher in males than females for almost all cancers. An exception was thyroid cancer, for which the ASIR for females was 31.2 per 100,000 compared with just 11.3 per 100,000 in males. A number of possible reasons for the higher incidence of thyroid cancer in females have been proposed, including:

While the incidence of less aggressive types of thyroid cancer, such as papillary carcinoma, is higher for females than males (Table 5.2), the rate of more aggressive types (such as anaplastic and medullary thyroid cancers) are generally similar between the sexes. The same is seen in other jurisdictions.[13,20] The result is similar for thyroid mortality rates between the sexes (see Chapter 6: Cancer Mortality Rates and Trends).

The incidence rates of non-malignant tumours of the brain and nervous system as well as lung adenocarcinoma were higher in females than males. Although the higher rate of non-malignant brain tumours in females also has been seen in many other jurisdictions,[21-24] the reason for these sex differences is not clear.

Between 2014 and 2016, the median age at cancer diagnosis was 67 years for both males and females (Table 5.3). The median age at diagnosis varied by cancer type. Of the 23 cancer types, cancers with the lowest median age (all under age 50 years) were testis, Hodgkin lymphoma and cervix. However, these cancer types are rare in children 0 to 14 years of age.

With the exception of thyroid cancer, the median ages for all other cancer types were above age 60.

In 2016, more than half of all newly diagnosed cancer cases were in people ages 60 to 79 (Table 5.4). The distribution of cancer types by age group varied widely.

Five percent of all new cases occurred in people under age 40, with female breast and thyroid being the leading cancers.

The under-40 age group also accounted for the majority of new cases of Hodgkin lymphoma and testicular cancer, at 53.6% and 64.2%, respectively.

Of all new cases, 23.9% occurred in people 40 to 59 years of age, with colorectal and female breast being the leading cancers.

Nearly half of all new cases of thyroid cancer occurred in people ages 40 to 59, and 41.8% of new cervical cancer cases occurred in females in this age group.

This age group was more likely than other age groups to be diagnosed with the most common cancers:

Of all new cases, 18.9% occurred in people 80 years of age or older, with prostate and female breast being the leading cancers.

Recent incidence trends for the 4 most common cancers

Since 1992, the age-standardized incidence rate (ASIR) for female breast cancer in Ontario has been steadily decreasing at 0.2% per year, likely due to the diminishing number of women with undetected cancer. Such a rise and fall in the incidence rate is characteristic of the introduction in a population of a new method of early diagnosis.

In addition, the use of hormone replacement therapy (HRT), associated with an increased risk of breast cancer among post-menopausal women, began to decline in Canada in the early 2000s.[25,26] This may also have contributed to a continuing decline in the breast cancer incidence rate in subsequent years.

The ASIR for colorectal cancer among males declined by 2.7% per year from 2008 to 2016. Individually, incidence rates for both colon and rectal cancers in males also declined during this period.

Among females, the colorectal cancer incidence rate was stable between 1996 and 2000, and then decreased after 2000 at a rate of 1.7% per year. These trends may reflect the following opposing trends for colorectal cancer sub-sites:

The decline in the lung cancer incidence rate in males and the slow plateauing in the incidence rate in females over the last 2 decades reflects differences in historical smoking rates between the sexes.[27] While tobacco use is the primary cause of lung cancer, other causes include exposure to radon, asbestos, environmental tobacco smoke and air pollution.

The increasing trend of lung adenocarcinoma among females has also been seen in other jurisdictions.[28-30] One explanation for this trend may be the longer latency of the effect of smoking cessation on adenocarcinoma rates. Once a person quits smoking, their risks for other lung cancer subtypes decline faster than their risk for adenocarcinomas.[29]

Given the historical differences in smoking rates between males and females, the increasing rate of adenocarcinomas among females may reflect the delay between quitting smoking and lowering adenocarcinoma risk in women. Finally, the declining trend in the male rate has allowed the female rate to surpass it.

The ASIR for prostate cancer increased 1.2% per year from 1993 to 2007, and then fell by 5.9% per year between 2007 and 2016. An abrupt rise and fall in the incidence rate is common when a new method of early diagnosis is introduced, such as prostate-specific antigen (PSA) testing for prostate cancer. The decrease starting in 2011 may also reflect the effect of recommendations from the U.S. Preventive Services Task Force against using PSA testing for the routine screening of healthy males.[31]

Notable changes in trend for other cancers

A rising incidence rate of liver cancer may be the result of:

Increasing trends in other jurisdictions suggest the rise in myeloma rates may be due to improvements in diagnostics and better registration of cases. [34]

The ASIR for thyroid cancer increased significantly during the 1981 to 2016 period. The greatest increase occurred between 1998 and 2002, at 12.9% per year. This was mainly because of the increase in the female rate of 14.5% per year. The overall incidence rate continued to increase between 2002 and 2012, but at a slower pace of 6.8% per year, before stabilizing in recent years. Among females, the ASIR decreased by 3.0% per year starting in 2012.

The rising incidence rate has been attributed to the greater use of ultrasound and fine-needle aspiration, which may have improved the detection of subclinical tumours (i.e., early tumours that do not cause symptoms).[35-38] A similar change in trend among females has been seen in other jurisdictions,[39] which have reported that thyroid incidence rates among females have stabilized in recent years.

Following a period of declining incidence rates, the ASIR for uterine cancer increased by 4.0% per year from 2005 to 2011 before stabilizing in recent years. The increase was mainly because of increasing incidence rates for endometrial cancer over the same period (4.8% per year between 2005 and 2011).

The age-standardized incidence rates (ASIR) from 1981 to 2016 for selected cancers are shown in Figure 5.3. These cancers represent the 4 most common cancers in Ontario (breast, prostate, lung and colorectal) as well as those with significantly increasing recent trends in ASIR.

For females, the AAPC:

Over the past 35 years, cancer incidence rates have been increasing among younger and middle-aged people, and decreasing among the elderly.

Among children ages 0 to 14 years, the average annual percent change (AAPC) in age-standardized incidence rates (ASIR) increased by 0.8% over the period from 1986 to 2016 and has been increasing by 1.7% per year between 2002 to 2016 (see Spotlight: Childhood Cancer Incidence Trend, Figure 5.S1).

A stage group (i.e., stage 0, 1, 2, 3 or 4) is based on distinct characteristics of a tumour that describe the extent of spread of a cancer in the body. Knowing the stage of the disease helps physicians plan appropriate treatment and determine the likely outcome or course of the disease. Information about stage at diagnosis is one of the most important factors for predicting the outcome for a person with cancer.

A cancer diagnosed at an early stage is more likely to be treated successfully. If the cancer has spread, treatment becomes more difficult and a person’s chances of survival are generally much lower.

The stage group is useful as a comparator within and across different cancer types, as well as for comparing trends over time. High-quality stage information at the population level supports healthcare providers, administrators, researchers and decision-makers in planning, evaluating and enhancing quality of care to improve treatment outcomes.

The majority of breast, prostate and cervical cancer cases, and half of all staged colorectal cancer cases were diagnosed at stage 1 or 2.

Incidence by stage among screening-program-eligible cases

Among people within the screening-eligible age groups for Ontario’s population-based breast, cervical and colorectal screening programs, a greater proportion of cases was diagnosed at stage 1 (Figure 5.7) compared with all ages (Figure 5.6):

Reasons for the lower proportion of stage 1 colorectal cancers may include lower screening participation rates (compared with breast and cervical screening) and inappropriate screening of people with symptoms. For colorectal cancer, a decrease in stage 4 diagnoses is more important than an increase in stage 1, because cancers at stages 1 to 3 have a fairly good prognosis compared with those at stage 4. However, not all cancers diagnosed within the screening age groups are screening-detected cancers.

The distribution of stage at diagnosis for female breast, prostate, colorectal, lung and cervical cancers has changed over the 2010 to 2016 period (Figure 5.8).