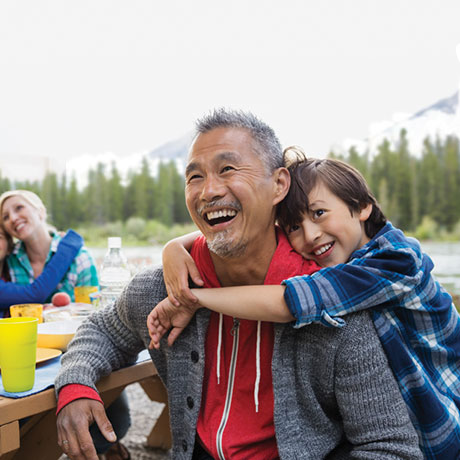 Relative survival measures the likelihood of a person diagnosed with cancer surviving for a certain amount of time compared with similar people in the general population. This chapter focuses on 5-year relative cancer survival for adults and overall cancer survival proportion for children in Ontario.

Survival statistics are a key indicator of prognosis, and the effectiveness of control programs and cancer treatment.[1] Relative survival ratios (RSRs) show the likelihood of surviving for a certain amount of time (e.g., 1, 3 or 5 years) after diagnosis compared with similar people (i.e., same age and sex) in the general population.

The first 5 years after diagnosis are critical for examining survival. This is when someone is most likely to access healthcare services, including primary treatment, and clinical assessment for recurrence. After 5 years, use of the healthcare system and the chance of recurrence both decrease.

Cancer survival depends on factors including the cancer type, sex, age at diagnosis, stage at diagnosis and the type of treatment received. While RSRs represent the average survival expected for the population of people with a certain type of cancer, these statistics may not reflect the prognosis of an individual. A person’s survival can also depend on their health status, the presence of comorbidities, and other personal and tumour-related factors. Survival estimates are based on data from people diagnosed in the past. That means they may not reflect the impact of more recent advances in cancer detection and treatment. Relative survival also does not distinguish between people who have no evidence of cancer and those who have relapsed or are still in treatment.

Survival improves over time because of better methods for (and the greater use of) early detection, as well as more effective treatments. Even small improvements in survival rates can, at the population level, represent large numbers of people who avoided premature deaths.[2] Improvements in survival may also be the result of increased incidence through improved early detection. Catching cancers earlier than they would normally be found results in a “lead time bias.”[3] This bias results in potentially detecting cancers that would never have caused harm if left untreated (i.e., overdiagnosis).

Survival by Sex and Cancer Type

From 2012 to 2016, the 5-year relative survival ratio (RSR) for all cancers combined was 66.4% (Table 7.1). This means people diagnosed with cancer during this period were 66.4% as likely to survive at least 5 years after diagnosis compared with similar people without cancer in the general population. 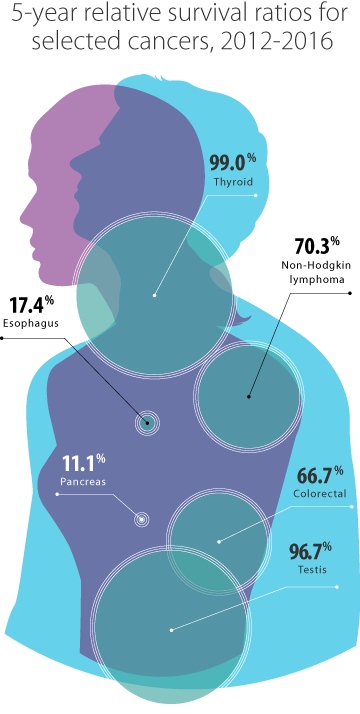 For cancer types that occur in both sexes, 5-year survival was:

People diagnosed with cancer were 66.4% as likely to survive at least 5 years after diagnosis compared with similar people in the general population.

For cancers with high mortality rates (particularly pancreatic cancer), relative survival estimates are generally higher in Ontario than in other provinces. This may be because of differences in survival methodology. Ontario’s methodology assumes that patients who are lost to follow-up are still alive at the cut-off date (5 years after diagnosis). This may result in overestimation of survival.[6] For high-mortality cancers, being alive longer than 5 years is very unlikely. This is particularly a problem for Ontario because evidence shows that the loss to follow-up rate is higher in Ontario than in other provinces. The reasons for this are unclear. Therefore, survival estimates for pancreatic, esophageal, liver and lung cancers should be interpreted with caution, especially when comparing with other jurisdictions.

There was wide variation in 5-year RSR for the following cancers (Table 7.1):

Male survival during this period was significantly lower than female: 64.3% compared with 68.3%, a gap that has been widening over time. This difference likely results from generally higher survival rates in females than males for cancer types common in both sexes — particularly lung cancer, the leading cause of cancer death in Ontario.

For males, 5-year survival was:

For females, 5-year survival was:

There were significant differences between males and females in 5-year survival for the following cancer types:

People diagnosed from ages 80 to 99 have seen little improvement in 5-year survival since the 1982 to 1986 period. As a result, the gap in survival between this age group and the younger age groups has widened over time. The greater improvements in survival among people under the age of 80 years may be the result of greater participation over time in screening programs for cervical, breast and colorectal cancers, and improved treatments available to them.[16]

Notable increases are also seen for:

Smaller gains in survival occurred for cervical, endometrial and laryngeal cancers, and melanoma of the skin.

A downward trend in survival was observed for:

For the 4 most common cancers, the following were observed for relative survival by duration:

Stage at diagnosis is one of the most important predictors of cancer survival. Population-level stage data in Ontario is available from 2010 onward for the 4 most common cancers (breast, colorectal, lung and prostate) and cervical cancer, and for a limited number of years for thyroid cancer and melanoma. This section focuses on the most common cancers.

Five-year relative survival for 2012 to 2016 tended to decrease with advancing stage at diagnosis (Figure 7.3). The level of decrease varied by cancer type:

Five-year relative survival for 2012 to 2016 tended to decrease with advancing stage at diagnosis. The level of decrease varied by cancer type.

Relative survival ratios (RSRs) represent the likelihood of surviving a specific number of years after diagnosis. However, sometimes it may be useful to measure survival starting at a time other than the date of diagnosis. Because people are more likely to die in the first year following diagnosis, survival after the first year (also called 1-year conditional survival) may be very different from survival measured at diagnosis. Table 7.3 presents survival at 5 years after diagnosis after already having survived 0 (the equivalent of non-conditional survival), 1, 2, 3 and 4 years.

In general, once a person has survived the first year after diagnosis, their chance of surviving 5 years continues to increase, but the amount of increase gets smaller for each year they survive. For example, the 5-year survival for colorectal cancer increases by 13.5% after surviving the first year (66.7% to 80.2%), but only increases by 8% after surviving the second year (from 80.3% to 88.2%). Exceptions are for glioblastoma, endometrial cancer, medullary thyroid cancer, ocular melanoma and lung small cell carcinoma.

Cancers with poor prognosis (e.g., pancreatic, esophageal, liver, lung, stomach, brain) showed the highest relative gain after the first year in the chance of surviving. For example, while the 5-year RSR for pancreatic cancer was only 11.2% at diagnosis, it rose to 34.7% for those who survived their first year. Cancers with good prognosis (e.g., thyroid, testicular, prostate, breast) showed only a small difference in 1-year conditional RSR because survival at diagnosis is already high.