Mortality measures the number of deaths caused by cancer. This chapter presents actual (non-projected) cancer mortality rates and trends over time. These statistics are based on counts complete as of 2016 – the latest available year.

Cancer as a Leading Cause of Death

In 2016, cancer caused 29.3% of all deaths in Ontario, making it the province’s leading cause of death (Figure 6.1).[1] Cancer caused almost as many deaths as the next 3 leading causes of death combined: diseases of the heart, cerebrovascular diseases and accidents.

Probability of Dying From Cancer

The probability of dying from cancer represents the average chance of death due to cancer. This probability depends on many factors:

These probabilities also reflect the average risks for the overall population and do not take into account personal risk. In other words, an individual’s risk may be higher or lower than the numbers reported here. 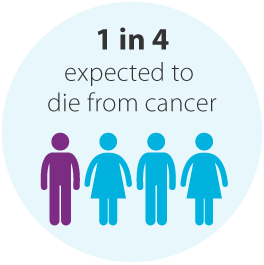 As with the chance of developing cancer, the probability of dying from cancer varies based on cancer type:

Mortality by Sex and Cancer Type

The 4 most commonly diagnosed cancers (lung, colorectal, breast and prostate) were responsible for almost 50% of all cancer deaths in 2016. 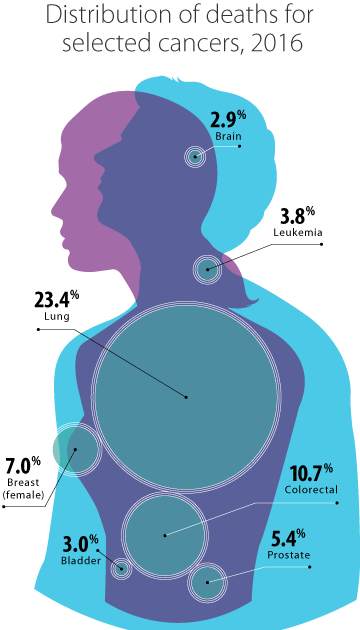 Some of the less commonly diagnosed cancers made a relatively large contribution to mortality because of their poor prognosis. For example, pancreatic cancer accounted for 6.5% of all cancer deaths in 2016 — more than prostate cancer and almost as much as breast cancer (Table 6.2).

The greatest differences between male and female mortality rates were seen in:

Males with Hodgkin lymphoma have generally poorer prognoses than females.[2] This may be because of biological differences between the sexes that affect how the disease progresses.[3] Tobacco use is a major risk factor for the remaining 4 cancers (laryngeal, esophageal, bladder, and oral cavity and pharynx). The higher mortality rates in males likely result from their historically higher rates of tobacco use.[4]

In 2016, 85% of all people in Ontario who died of cancer were 60 years of age or older (Table 6.4). Mortality was distributed differently by age group.

People younger than 40 years of age made up 1.4% of all cancer deaths (compared with 5.0% of all new cases), with brain cancer and leukemia as the leading causes.

People 80 years of age or older made up 35.6% of all cancer deaths (compared with 18.9% of all new cases), with lung and colorectal cancers as the leading causes.

While prostate cancer was diagnosed most frequently in males ages 60 to 79, most deaths caused by prostate cancer were in males 80 years or older. This reflects both the often slow progression of the disease and the higher frequency of later stage cancers in older males.

The cancer mortality rate for all cancers combined in Ontario has been decreasing over the past few decades, with the decline accelerating in recent years. Between 1985 and 2001, the age-standardized mortality rate (ASMR) decreased by 0.5% per year and fell a further 1.6% per year between 2001 and 2016 (Table 6.5).

Recent mortality trends for the 4 most common cancers

The prostate cancer ASMR decreased by 2.9% per year from 1994 to 2016 (Table 6.5). This decline is likely due to early detection, which decreased incidence, and to improved treatments -that increased survival from prostate cancer.

Reasons for these strong declines may be changes in risk and protective factors, earlier diagnosis due to greater uptake of screening, and improvements in treatment.[9]

Decreases in lung cancer mortality are largely attributable to decreased tobacco use, which began to decline in the late 1950s for males and in the mid-1970s for females.[4,10] This approximately 15-year gap in peak smoking rates between males and females corresponds to the gap in the stabilization of lung cancer mortality rates between the sexes.

Notable changes in trend for other cancers

The liver cancer ASMR has been increasing at 2.4% per year from 1994 onward, following a previous rapid upward trend in the mortality rate (Table 6.5). This increase was probably at least partially because of the rise in the incidence rate over the same period.

The ASMR for ovarian cancer was stable from 2003 to 2007 followed by a significant decline of 1.0% per year from 2007 onward (Table 6.5). This parallels the decrease in the ovarian cancer incidence rate since 2002.

Declines in ovarian cancer incidence and mortality likely result from changes in exposure to risk and protective factors, including the increasing use of oral contraceptives.[11] Declines in mortality may also reflect increasing survival due to improvements in treatment.[12]

Reasons for this decline include decreased exposure to Helicobacter pylori (H.pylori) infection, improvements in food preservation and refrigeration, lifestyle changes, and better treatment.[13]

Over the most recent 35-year period of 1981 to 2016, the average annual percent change (AAPC) in the age-standardized mortality rate (ASMR) for males (Figure 6.3): 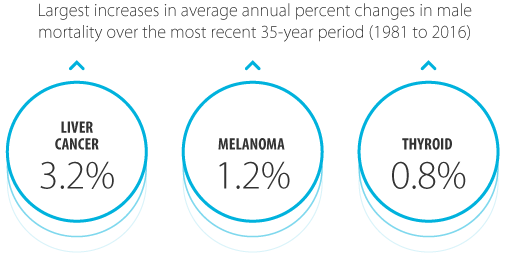 Over the same period, the AAPC in the ASMR for females: 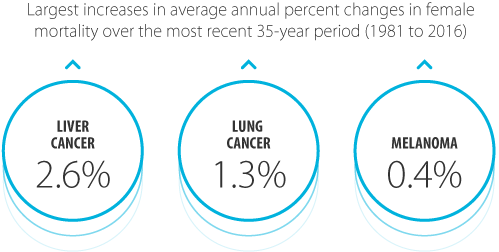 For some cancers, such as liver cancer and melanoma, the increases in mortality rates likely reflect increases in incidence rates.

The ASMR for the 1981 to 2016 period for bladder, breast, colorectal, liver, lung, melanoma, pancreatic and prostate cancers are shown in Figure 6.4. These cancers represent the 4 most common cancers plus those with an important trend in mortality.

Mortality rates across all age groups have been declining significantly over the last decade. In younger people, they have declined fairly equally between the sexes. However, among people age 60 or older, the declines in mortality have been greater among males (Figure 6.5).

Age-standardized mortality rates (ASMR) among individuals diagnosed with cancer as children (0 to 14 years of age) have been stable over the period between 1991 and 2016 (see Spotlight: Childhood Cancer Mortality Trend, Figure 6.S1).

For people ages 40 to 59, the mortality rate was stable until 1987, when it started to decline by 2.1% per year until 2016. Similar trends were seen for males and females as separate groups.